KMFasTrans is updated using the Joomla update process. If a problem occurs in the update, a message or messages indicating the situation will be displayed. If it is not something that you can solve, such as for example that you have not registered the update code or that there is an error in it, or that your subscription has expired, that is to say that it is really an error, you have to take a screen capture of the error and open a support ticket.
If the error had a temporary cause and can be solved without creating a new version of KMFasTrans, but re-updating to the version that ended in error, it is necessary that Joomla recognizes the installed version as an older version. For this you have two buttons on the control panel as shown in the screenshot below:

Pressing the button 'Allow re-update' will temporarily change the version of the extension from the current value to 0.0.0. The button is only enabled when the re-update is not allowed.

The control panel info will change as follows: 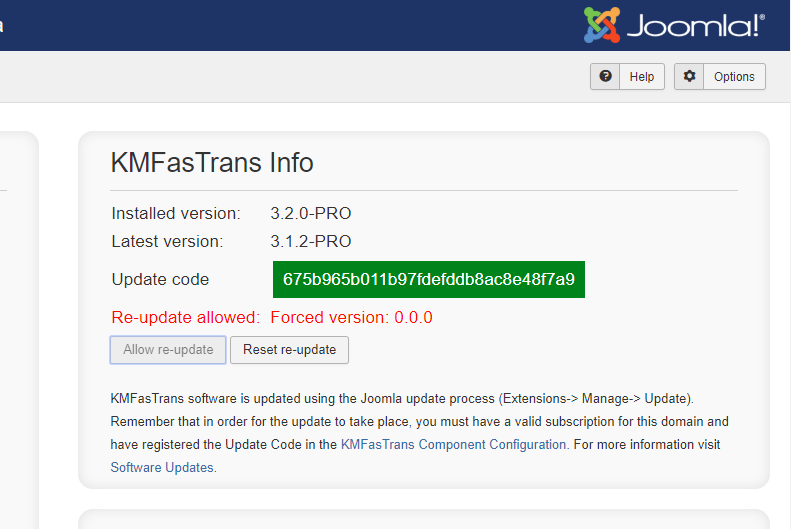 With this change Joomla will detect that there is an available update, whose version is 3.2.0, thus making it possible to re-install the same version that is installed if certain circumstances or the support staff so advise.
If the installed version is not FREE the re-update has to be allowed by the support staff.

Please, bear in mind that the version that you will see in Joomla after pressing the 'Allow re-update' button will be 0.0.0, even if it is not the version actually installed. This will be the case until the re-update is finished, or, if you decide not to re-update, until you press the 'Reset re-update' button that will reset the situation to the initial condition.

Once the re-update is complete, everything will return to the normal situation.

This site uses cookies to manage authentication, navigation, and other functions

If you continue browsing, we will understand that you accept its use. If you need more information you can view the e-Privacy Directive Documents here